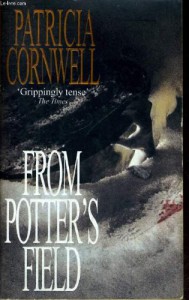 30/3 - Like The Body Farm this book's title is false advertising. An even smaller portion of the book was dedicated to what's named in the title - the first victim is originally a Jane Doe and is buried in Potter's Field (her real identity is later discovered and she's moved to a family plot). Thinking about the plot of the book I can't think of an appropriate title off the top of my head, so maybe Cornwell had a similar mental block and at the last minute just pulled the title from an interesting (though barely mentioned) location that she had used in the book, not even considering how little it had to do with the story. Or maybe the publisher thought the idea of a book with a storyline that featured Potter's Field (and the body farm, previously) would make it a bestseller and didn't consider how it fit with the plot... Either way I think it backfired because it just leaves me scratching my head as to what Potter's Field really has to do with anything.

I do think Cornwell's endings tend to be a bit rushed. 400 pages of build-up and escalating tension and then everything's over in a chapter and a one page epilogue (if that), it all feels a bit abrupt and like she gets to the end of her books and after all that time and effort she just wants to get the book over and done with. After all the work I think the endings should be savoured, maybe steal 30-50 pages from the build-up and really give the end the time it deserves and add a decent epilogue (where appropriate) so we know how everything wrapped up properly.

Because the inappropriate title annoyed me as much with this one as it did with The Body Farm I had to deduct that same star, but fortunately there were no confusions with Lucy's age versus how many years were supposed to have passed. As soon as I finished this last night I picked up Cause of Death and read 100 pages of that before I could force myself to put it down and go to sleep. I'll likely finish that one tonight, very nearly a one-sitting read as Cosmopolitan suggests.

Fiction - Crime Books I Own