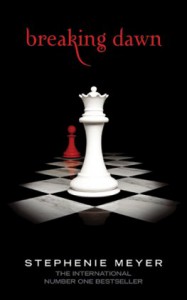 30/4 - I gave this book 5 stars because even though it starts out with Jacob in pain it ends with him completely happy with his and Bella’s situation. Personally I don’t think I would be happy with the idea of living forever and ever and EVER – maybe for a few hundred years or the ability to know what will happen in the future, but I wouldn’t want to live for infinity, to see the death of the planet and the solar system. I love the idea of getting all these vampires together for a battle (I wish there had been a battle because that would have been really exciting), with so many of them having extra supernatural abilities. If there had been a battle I’m sure Bella would have had no trouble shielding everyone while everyone else fought and the good guys would have won with only some injuries – no deaths. That would have been great (reminds me a bit of the final battle in Harry Potter). One logic problem I had with the “Jacob imprints on immortal half vampire baby” story line, what happens when Renesmee lives for hundreds of years – forever? Does Jake simply grow old and die or does he stay a shape shifter and live a lot longer (but still not forever) like the first chief did? Either way it seems to me he’s going to die eventually and leave Renesmee behind. That doesn’t seem right to me.

Books I Own Fiction - Vampires