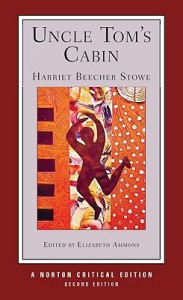 3/9 - I'm Australian. I don't really know that much about the slaves of America, what I do 'know' is mostly from movies and tv shows (maybe a few books) and so is possibly not all that accurate. My review is coming from the POV of someone who doesn't know anything (well, not anything that can be said is definitely true and provable) about the topic. Just wanted to make that all clear in case some trollery types thought I should know more about the subject before I read the book.

The story is good so far (only 25 pages in, so don't really have an opinion yet). I'm finding myself needing to sound some of the dialogue out as it's not always immediately clear what is being said, especially by Aunt Chloe. There are so many apostrophes to indicate contractions in the words in her speech - do not to don't, but far less common, words that are no longer contracted in today's language. Elizabeth Ammons' preface was really quite interesting and the footnotes (which I'm not really a fan of as I feel they break the flow of reading) do help to explain some things that I otherwise would have to google. To be continued...

3/9 - I'm finding some of the passages of dialogue close to incomprehensible. Thank goodness for context, otherwise I might never have worked out what sentences like

"...you see I wouldn't be 'tall surprised if dat ar gen'leman's crittur should gib a fling, by and by, when he comes to be a gettin' up."

I do know what's going on, what's being discussed, but am unsure of the true meaning of a couple of words - gib and ar. Just as I'm writing this I've worked out that gib is give, but ar? Every time I read it and hear it in my head I think of pirates and no more literary analysis happens for a while.

Was this footnoted in its original publication? I wonder because some of the footnotes are a bit strange if they were written for this era's reader. Morale for example, there is a footnote for morale telling us its meaning and that it's of French origins. But there is no footnote to accompany the much more linguistically troubling use of "High!" as a greeting. I never would have imagined that "Hi." came from the high that has to do with how tall an object is. How can the same word mean two such disparate things - a greeting and the location of the placement of a shelf on the wall? The English language gets more indecipherable every day, with every visit to Wikipedia to look back into the history of the etymology of a word. To be continued...

5/9 - Now here are a couple more words that are bothering me and stopping the momentum of understanding that I had going this evening. Is there anyone who can translate for me?

"Sam, however, preserved an immovable gravity, only from time to time rolling his eyes up, and giving his auditors divers inexpressibly droll glances without departing from the sententious elevation of his oratory."

Who, or what, are 'auditors divers'?

What on earth does 'yer' mean? I thought it meant 'you', but as you'll see in the following sentence that's not quite right.

"Why, but Sam, yer (you?) telled me, only this mornin', that you'd (if the previous 'yer' means you, why not write yer'd in this instance?) help this yer (?) Mas'r to cotch Lizy; seems to me yer (your?) talk don't hang together," said Andy

Is yer like an old version of the eternal question of there, their, or they're? Except instead of multiple spellings with multiple meanings yer's got one spelling and God only knows how many meanings.

One another note, I like the little asides to her readers that Stowe makes every so often. Asking her readers how they would feel if their child were to be ripped from their arms and mocking any hypocritical enough to complain about Stowe introducing them to the 'indecent' topic of catching fugitive slaves as, as Stowe says (not literally), if society had continued in the direction it was going slave catching could have become the national pastime, second only to baseball. To be continued...

/9 - Boy, I just love to hear in casual conversation about the owning of people, how much a 10-month-old is likely to go for at auction vs. a slightly older boy and how the loss of a slaves' life to suicide is no more troubling than the loss of a piece of baggage. It's also so heartening to hear slaves talked about as 'creatures' (even by those more sympathetic to their situation) and 'things' to be traded and that due to their lower class they don't feel the loss of a child the way more 'civilised' people do. Such an inspirational novel!

This book is recorded as being 616 pages long, and it is if you include all the pages with text on them. Unfortunately for those looking forward to a good long book, the last 208 pages are 'Backgrounds and Contexts'. These 'Backgrounds and Contexts' are, I'm sure, perfectly interesting and help today's reader to understand the nuances of Uncle Tom's Cabin, but, in my opinion, they aren't part of The Book and so can't be considered when you talk about how long the book is. Those 208 pages include photocopies of announcements of sale, reward posters, excerpts from some of Stowe's sources (including one from Twelve Years a Slave), excerpts from other pieces by Stowe, notes about other novels that are known as 'Anti Uncle Tom Literature', and reviews from contemporaries such as George Sand and more recent writers like James Baldwin, there is a piece by Jane P. Tompkins about where Uncle Tom's Cabin fits into literary history and a chronology of Stowe's life and 'selected' bibliography. I don't think I'll be reading all of those pieces of background and context, no matter how interesting they might sound. I think by the time I finish reading the story I'll have had enough of the misery of slaves as well as their challenging way of speaking. To be continued...

4/10 - God! I hope Ophelia has a strong enough stomach and will power to deal with the monster that is Marie. Marie's ideas regarding the owning and proper management of slaves are sickening, all the more so because she believes that she is a good Christian woman who is treating them with more kindness than they deserve. I won't go into detail about the treatment she believes is necessary to get the best out of your slaves because I'll be here all night writing a 10 page rant about how horrible this woman is. I want to shake her until she knows what a real headache feels like.

Despite the ragey feelings pouring out of me right now, it's nice to get back to a book with an engaging plot after the rubbish that was the first 30 pages of The Pregnant Widow. For some reason I took an ill-advised break from reading Uncle Tom's Cabin, and it's good to be back. Maybe it wasn't so ill-advised after all as I have come back to it eagerly, maybe it was a well-timed break and absence has made my heart grow fonder. To be continued...

7/10 - Finally finished!! Ultimately, I enjoyed this book, but it was hard to read. The subject matter was difficult, the dialogue was possibly even more difficult, and the beginning was a little slow. After about 150 pages I finally got used to the dialogue style, which after much thinking I've come to characterise as 'lazy' - a couple of the 'servants' state the fact that it's too hard to learn all the different words and that one is just as good as another (in one particular scene Tom's wife Chloe is hired out to a 'perfectioner's', the reader eventually learns that she actually means confectioner's when Mrs Shelby corrects her), hence my name for it. So many of the words are made up of contractions on top of contractions that in a number of places I resorted to reading portions of the dialogue aloud, in an attempt to hear it the way the characters were speaking it. If you didn't find the language I described earlier in my review hair-tearingly frustrating then I recommend you give this a go.