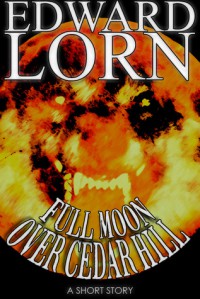 Disclaimer: I am friends with the author of this book. That has not effected my ability to write an honest and critical review of his work.

An interesting twist on the werewolf story. I did notice a few editing/grammatical mistakes but that didn't mar my reading experience drastically.

Location 96
'...no one had had the patience for such an invalid as Peter had become, and he'd never seen his home of forty years again.'
This is an awkward sentence for a number of reasons. To start with, this had had is just the first of about six examples throughout the book of the use of had had. One or two, in a book this short would be fine, but so many end up looking repetitive and as if Lorn doesn't have the vocabulary to write it without repeating the word 'had'. such an invalid as Peter had become? That doesn't sound like the Lorn I'm used to reading, it sounds like he was trying (and kinda failing) to sound posher than he normally does. It doesn't work and isn't necessary. A much less convoluted the invalid Peter had become is far better. The end of the sentence he'd never seen his home of forty years again sounds like Lorn was in two minds as to how to write the end of the sentence and ended up accidentally merging the two ideas into the mess it is now. But it's an easy fix, just swap he'd never with he hadn't and again with since and it's much more readable.

Location 121
'Damn that family of mine. Damn them all to hell'
I think Peter is being a rough on his family here. I don't think he realises how hard it is to care for (and be cared for by) a family member (especially a child). Would you rather have your son or daughter having to give you enemas and sponge baths or a cheerful, impersonal nurse? I know I would certainly choose not to be a burden on my family, and not to have to suffer the indignity of having my child see me naked.

Location 194
'...balked at the idea of a puppy in the house when Monica had started her periods because the dog would go mad with bloodlust and kill them all in their sleep...'
I'm not sure if this is meant to be ironic or a comment on Isabelle's intelligence or if it's some kind of ridiculous urban legend I've never heard of. I've owned a or many dogs from the time I was 10 and not once have I noticed anything different with them, at any time of the month. I've had six dogs (four boys, two girls) and none of them have ever shown any bloodlusty behaviour around me or my mum or any of our female friends.

Location 237
'Peter passed an wrinkled old man...'
Either switch wrinkled and old around or that an should be an a.

Location 271
'Peter glanced over his shoulder to find the creature ogling at him.'
That at is unnecessary.

Regarding the end, I have a few questions. How does Peter change? Is the bite on the calf, which happened only minutes before he changed, enough to infect him? How did the werewolves know to come for him? It appeared that the werewolf motioning to the moon is what triggered the change, if the werewolves hadn't come would Peter have changed at all?

My favourite part of the book (and perhaps his entire breadth of work) was that he's not afraid of the gore. He doesn't shy away from giving the reader a full frontal description of what happens to a person when they die a violent death. I'm not a fan of the bloodless gunshot wound *cough couCSIgh cough*. I own the rest of his books in either eBook or paperback (or both) form and I look forward to continuing to read his work.

Fiction - Horror eBooks I Own