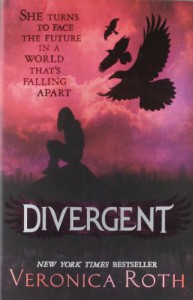 2/5 - I loved the movie, more than The Hunger Games...God I hope the book isn't a disappointment! To be continued...

3/5 - Sooo NOT a disappointment. Sooo fantastic!! The three other five star books that I've read so far this year pale in comparison, this book deserves the five stars so much more than those other three books (sorry other three books, you were great when I read them, but now I see that I didn't know what great actually meant till I read this one). This was so easy to read I actually managed it all in well under 24 hours, although I do think the 489 page count is slightly cheating as my pages had wide margins and double spaced typing. If this had been formatted more like the average book it probably would have lost 100 pages from the total, but that's up to the publisher and certainly didn't detract from how fabulous the story was.

I had only one small quibble with the writing - the phrase 'go unconscious', which was used quite a bit because of the physical training the initiates took part in stage one. The phrase 'go unconscious' just doesn't work grammatically, the verb/doing word needs to end in '-ing' for 'go' to work - go walking, go diveing. It should be 'become' or 'fall' - 'fall'/'become' unconscious.

Like I said before, I loved the movie and I think having seen it first added to my reading enjoyment. I could see the matching movie scenes being acted out in my head, which really helped my hit/miss imagination. I think Tris was perfectly cast, but I think Theo James was too old to believably play a 17-year-old (not that they mentioned how old he was supposed to be in the movie, and not that I didn't love him, he was just too 30-appearing to be 17), I also don't think James looked particularly forbidding as he was described by more than one character in the book.

This was such a nice, fun book to read after Lolita. I definitely feel at least partially disinfected of Humbert Humbert's poisonous words and ready to get started on my next challenge book.