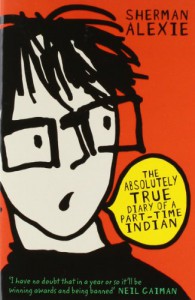 17/5 - I know barely anything about American Indians/Native Americans (not even what they would choose to be called, I'm going to go with what Alexie referred to himself as), and most of what I do know is probably not true seeing as it came from Avon romances from the 80s and 90s. I know my ignorance is going to be showing, but as I write this review I'm going to try very hard not to come across as racist too.

This was a really quick, easy read helped along by a 2.5 hour wait at the doctor's clinic today. I was a bit horrified by the descriptions of life on the reservation, when I first started reading I had to check the publishing info because I couldn't believe those conditions were current, they sounded more like something I would have expected of the 50s. I've only met one American Indian, he sold me a dream catcher in a little store in Jackson Hole, Wyoming. That's the extent of in person contact I've had with American Indians, so the only way I can attempt to understand their situation is to compare it to the way Indigenous Australians have been treated. Australian Aborigines have been battling to win back the rights to their own land for decades now and while it may never be completely over, there have been major steps forward. Despite government programs in place to change things Australian Aborigines and Torres Strait Islanders continue to have the lowest average life expectancy, be more prone to alcoholism and domestic violence, and have lower literacy rates. I assume American Indians suffer from similar problems in a higher proportion to the rest of the population of the USA. Where I'm going with this comparison is that I'm not sure I understand why American Indians would continue to live on a reservation that they were forced onto in order to get them out of the way while the Europeans waited for them to die. Many Aboriginals were forced onto church missions during the 20th century, but most of them have now left them to live where they choose - either in urban environments or small, remote settlements of their own choosing. Why haven't the American Indians done the same?

I didn't know this was semi-autobiographical, including his medical problems, despicable treatment by his peers, move from the reservation school to Reardan, and alcoholic father and that knowledge makes some of the events of his life that much more dreadful. A number of times during his depictions of life on the reservation I just couldn't comprehend how people could treat another person that way, especially the adult triplets. It was mind-blowingly horrible and I just wanted to shake those MEN and ask them what the hell's wrong with them. It actually reminds me of a Bowling for Soup song, 99 Biker Friends, which is about wishing a whole ton of really large men would come along to help the group beat up a guy who abuses his girlfriend (see how he likes it) - Chuck Norris, the A-Team, Bruce Lee, the 'dudes' from Danger, Danger (whatever that is), 50 Cent and a couple of prison guards are all mentioned as good possible members for the 'beat up the abusive asshole' team. I wish those triplets could meet Bowling for Soup's team, get a little of their own medicine.

I'm glad I finally got the chance to read this. I first added this to my to-read list because it's included in the official 1001 Books to Read Before You Die book. When I first came across this book I didn't know anything about the controversy surrounding the it or the fact that it was banned by numerous American school boards, but now that I've read it and am aware of everything swirling in the background I have to shake my head at those stupid school boards. To stop teenagers from learning more about the situation that their fellow teenagers from another culture survive through all because of a little bit of foul language (what, the school board/parents think the kids don't hear these words in every day life anyway?) is just ridiculous. These boards need to get a clue and start listening to more than just overly outraged parents! Okay, I've waffled on for long enough now. This really is a great YA book that everyone (young, old and in-between) needs to read someday before they die.