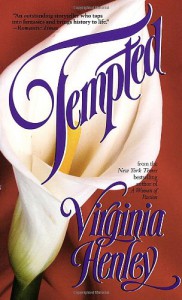 10/10 - I didn't think too much of this Henley romance.  For too much of the book Ram hated Tina, even within the last 100 pages when he believed Tina has betrayed him with another man he attempts to slash her with his knife, only the actions of one of the castle's ghosts saves her from serious injury.  Some of the feelings that came up while I was reading this mirrored what I felt while I was reading FSoG, I felt anger and despair that Tina was going to be forced to marry this man who obviously felt such hatred for her.  I was also really upset by the way Tina's mother treated her and saw her as a perfect sacrificial substitute for her younger sister, taking her place as wife to Ram.  I just wanted to hit Tina's mother (can't remember her name) for choosing one daughter over another (can't remember the younger daughter's name either) like that.  Other reviewers mentioned being able to overlook the fact that Ram's consummation of his handfasting to Tina was actually rape because it was historically accurate or because he recognised how wrong he was once presented with the evidence of her virginity (bloody bedsheets).  Personally, I couldn't overlook it, especially because he continued to act in a similarily aggressive manner towards Tina through most of the rest of the book, and so it tainted how I felt about him.  I also don't think the fact that he recognised how wrong his behaviour was makes up for the original behaviour, mostly because the reason he feels that he treated Tina badly is because she was a virgin.  Does this mean that if she hadn't been a virgin it would have been fine to pretty much force her into having sex with him?  No, virgin or not, I don't like reading about rapes in my romances.  It kind of sucks the romance right out of the story.