City of Bones (The Mortal Instruments, #1) by Cassandra Clare

Clary and Jace being siblings

and am hoping to find some kind of loophole in one of the sequels. Looking forward to City of Ashes.

18/5 - Rereading this in order to write a more in depth review. To be continued...

19/5 - If you hated the movie, then you'll probably be pleasantly surprised with the book. The movie was a train wreck of bad casting and a case of trying to fit too big a book into too little screen time. Despite having read the book, most of the time I couldn't understand what was going on in the movie. This was one of the worst movies I've ever seen, coming a close second after Vampire Academy. Most people seem to either love or hate this, there's not much in-between. When I read this four years ago I loved it, I'll have to get back to you on my opinion with my older and more well-read brain. To be continued...

22/5 - Okay. I've done my reread and my opinions are a little different from what they were four years ago, but not drastically. I'm bringing the rating down one star because the writing isn't that great, but personally I would choose a great plot over great writing every time (see my reviews for books with 'great writing' for examples) and I really enjoyed the plot. I have heard/read some of the discussion regarding plagiarism but I don't really know what did, or didn't happen, so I haven't taken any of that into account in this review or the rating I've given the book this time around. I did notice one thing that I missed the first time, how similar it is to the Harry Potter series. Valentine closely resembles Voldemort (even in the first letters of their names), Luke's description of the Circle immediately made me think of the Death Eaters, but while I can see those similarities I'm also of the opinion that there is very little that can be called original in fiction these days. Everyone is influenced by everything and Clare being influenced by Rowling is only a bad thing if you didn't like Harry Potter, which is the complete opposite of how I felt about that series. Like a lot of other reviewers I liked the secondary characters more than Clary, Jace, Isabelle, and Alec (on his own). I really liked Simon and in my head he looked like Joe Dinicol from Blindspot (who is much better looking and would have been a better choice than the guy they cast for the movie) 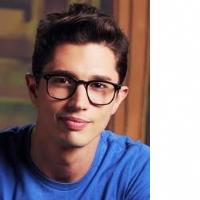 and I look forward to seeing more of Magnus Bane in the next installment. I will definitely continue rereading this series, at least until I get up to where I stopped reading the first time, then I will simply be 'reading' for the first time around.