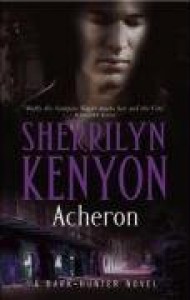 1/10 - This is the first time I've read a book that's part of a series and is the final (so far) book in the series. Luckily it was a book that went into the back story of the whole series, giving me the connections between the many different characters that pop up in this one and previous books in the series. I would've given Acheron five stars but for the fact that I felt the first part of the book, when he was still human and being constantly used, tortured, and brutalised by almost everyone around him, was too long. I thought that devoting half of the 700, or so, pages of the book to his pre-godhood hell would be enough, but it turned out to be closer to 3/4, leaving not enough room for the current day romance. In the introduction Kenyon apologised for the way she'd written the first part, promising long-time fans that the normal wit of her dialogue would be evident in the second part of the book. Obviously she was worried that the horrible things that happened to Acheron while he was human in Atlantis would put people off. I wasn't put off, I agreed with her that it needed to be part of the book to show us how he got to be the way that he is in the present day. I borrowed this yesterday, started reading it immediately and finished this afternoon - less than 24 hours later. I enjoyed this so much that when I return it I will see if I can find any other books from the series.